Are you truly awake? — Dreamtalk

Dreamtalk (online) presented by NUS Centre for the Arts, 4 September 2020

“Are you truly awake, or are we all just passing-by in a dream?” 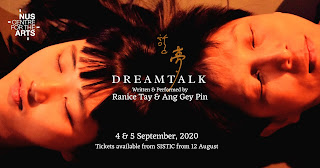 In the performance film, multiple images of the dreamer (Ranice Tay) and the guardian (Ang Gey Pin) are seen with the use of the superimpose effect. The uncanny doubling of the two characters poses a sense of duplicity and illusion, which questions: Who is dreaming? Who is the dreamer? Are we who we are? Or are we multiple versions of who we think we are?

The central images of the performance are a huge silky translucent cloth which gives the hazy and yet poetic portrayal of ethereal manifestation, and a black umbrella which is highly symbolic in the piece.

The silky cloth seems to suggest a web of dreams presented in our lives. The significance of the black umbrella speaks strongly to me. Though the performance centres around "dreams", it is about the in-between state of life and death to me. The black umbrella in a Taoist funeral ritual means "cover for the soul". It is used to transport the dead to another world. This is thus, a dream state of the spirits, ancestors, and ghosts from the present and the past. 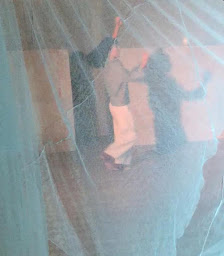 The dreamer is holding on to a lamp and umbrella. She is like a spirit/soul being guided through the underworld of dreams haunted by her memories and subconsciousness.

The sounds of recurring heartbeats suggest that “dream” is a state between living and dying. The merging of songs, verses and sounds brings me through a surreal and intense journey in the dreamscape.

In a funeral, red packets/red strings are given to the family, relatives and friends who attend the occasion as a form of blessing to them. In the film, the use of red amid the dull colours of the costumes (black, blue, white) signifies auspiciousness, which gives hope to the dreamer.

The dreamer, covered in a huge sheet of white paper and waking from it, is hinting that the dead is moving from one realm to another realm, through the planes of existence. The way she carries the huge piece of white paper and sculpturing it with care is like paying homage to the ancestors before her…

The piece ends with predominantly blue lights with a tint of orange, which engulfs me with a transcendental and intimate experience. Perhaps, the whole human existence is about moving beyond death, and attaining deathlessness as life itself is an illusion. Wake up!

While the superimposed scenes which depict the double-images of each character work really well to provide a dream-like state, not knowing who the dreamer is, I wish to see less editing effects such as the constant shifts of edited shots and the split screen. For instance, I wish it could be a pan of camera angle from one action to the next instead of having a split screen to depict two simultaneous actions, which is closer to how a live performance is experienced in a continuous fashion. I wish that the videographer could follow through a one-shot sequence more often, even if there is a need to shift from wide angles to close-up angles.

However, ultimately, I admire the risk-taking spirit that the team has taken. It is courageous and this is definitely a theatre project much needed during this pandemic period. It is a truly powerful piece of work. I am totally immersed in the heightened experience.

Get your tickets from SISTIC: https://www.sistic.com.sg/events/zldt0920