Food, Fast & Starve – A Review of Ode to a Famished Existence (Phase 1)

Ode to a Famished Existence (Phase 1), an arts-in-development by Sourcing Within 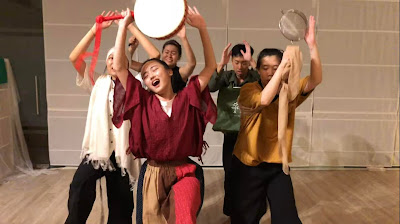 A lady in an attire which resembles the Chinese funeral clothing is mourning. The performance/rehearsal space, though transmitted through the cyberspace, emits the layering of soft weeping and mourning sounds.

The solemn scene suddenly breaks into a comical moment in which different food dishes are mentioned with absurd and surreal movements. We have to eat no matter what we face in life, don’t we?

Despite adversities, problems or setbacks we face in life, food is there to comfort us. Familiar Asian and Western fare is narrated with animated movements from the ensemble (Ranice Tay, Eleanor Ee, Michelle Hariff, Joel Low, Voon Ee Sing), bringing the dishes to a culmination of farce.

The high note is then decelerated into an earnest act of a philosophical examination of food and hunger. The performers question the meaning of hunger in our existence and what we truly yearn for. What is "food" to keep us alive in life? What is "food" for these performers? What about "food" for the viewers who go through this journey of questioning with the performers? While questioning, the performers move in great synergy and the energy is balanced. A unified level of training is demonstrated through the synchronicity, not just in their physical actions and bodies, but in the harmonisation of voices too.

While food seems to be the centre of life and many could be obsessed with food,  as presented in the beginning of the piece, we are introduced to the notion of fasting next. The performers discuss about hunger artists who did “professional fasting” in history. They were also known as the “romantic starving artists”.  Some of these artists were awarded with monetary rewards. Is a hunger artist a symbolic representation of one who is seeking spiritual fulfilment or one who is seeking fame and attention?

Streaming from the conversation on hunger artists in history, the performers question and comment on the prevalent situation of poor artists with a satirical approach. One makes a remark, “The hunger artist was working earnestly, but the world was cheating him of his rewards”.

Throughout the performance, the soundscape is formed by objects and props such as a drum and kitchen utensils, as well as the performer’s voice. Richness of sonic layers fills up the space.

Michelle Hariff impresses with her subtle use of changes in tone and voice to deliver her well-articulated lines and songs. Together with the ensemble, the image of a thousand-armed goddess is created with her pure and gentle timbre vocals. She has also demonstrated great control of comical moments in this scene. 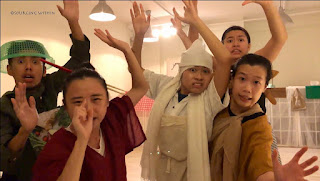 Ranice Tay, the dramaturg and performer, delivers her actions energetically with great ease. With a set of chopsticks used as her hair accessory, she is draped in a traditional robe. She seems to be the oriental figure of the piece which represents the need for groundedness and yet animateness in the artistic journey of seeking and questioning by the ensemble.

The film was shot in a single take by the director Ang Gey Pin with the essence of show captured. It only takes a director who is an actress herself and works so closely with the ensemble to be able to capture the quintessence of the piece. Every action of each performer is visible to the viewer without any edits. Each soul is exposed and yet it is so organic to watch.